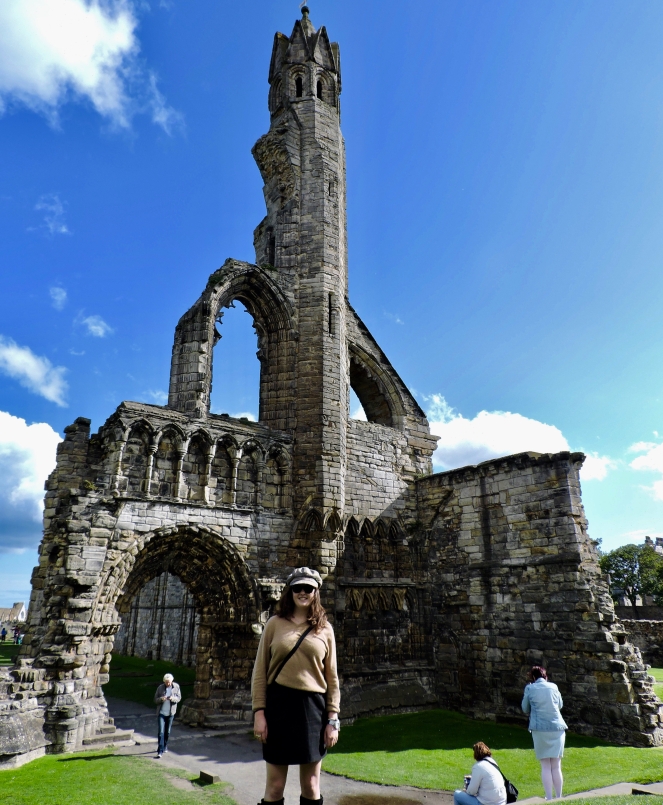 For the past eight days, I have been lucky enough to have four special visitors in Scotland, my Mom, Dad, Grandmother and Uncle! We have been extremely busy touring around Scotland, and I am just so happy to show them all the beautiful country I have been living in over the past year. The first stop on my family’s Scottish holiday outside of Glasgow was St Andrews. St Andrews has always been high on my list of places to visit, first of all, because one of my favourite places in Canada is St Andrews in New Brunswick, and secondly because it is where William and Kate met while they were both students at the University of St. Andrews! St Andrew is a short drive away from Glasgow, a little under two hours. Unfortunately, there is not a train station in St Andrews, so that had prevented me from visiting St Andrews earlier in the year. However, renting a car and watching my father drive on the other side of the road proved to be rather entertaining, especially since I am now so used to be on the left side of the road!

St Andrews is situated in the Kingdom of Fife, located on the East Coast of Scotland, right on the ocean. It’s funny to think I had gone most of the year not seeing much of the ocean, and the last few weeks and I have seen the ocean every week!! 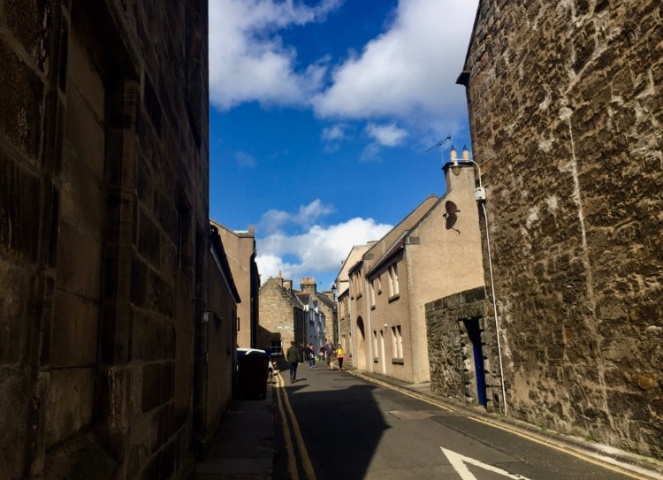 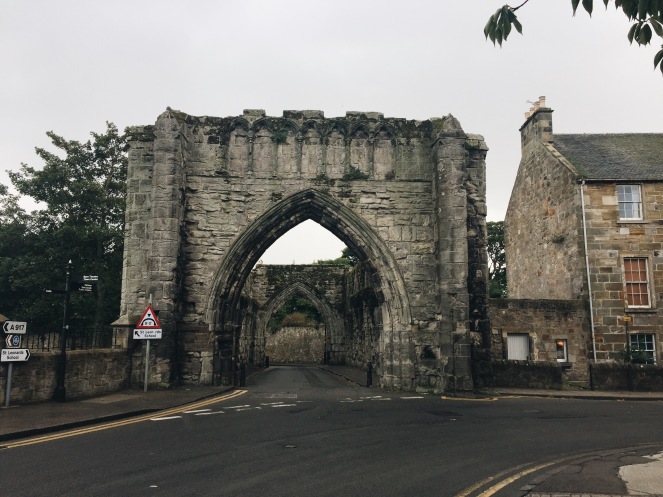 After grabbing lunch at a local pub we headed out to explore the town. The first discovery was the ruins of the St Andrews Cathedral. I had read about them briefly before, but the historic site was definitely WAY more impressive than I had pictured in my mind. Dad and I spent almost an hour just walking around the site before it started to rain. The cathedral itself was founded in 1158 and was the centre of the Medieval Catholic Church in Scotland. During the Scottish Reformation in 1559, a group a Protestants ransacked the church, destroying the interior of the building. The church never recovered after the attack, and shortly was abandoned in 1561. Throughout the grounds, there are various gravestones, and empty graves, which date up to the late 19th century, so despite the church being a ruin it was still used a graveyard well over three hundred years from its downfall. 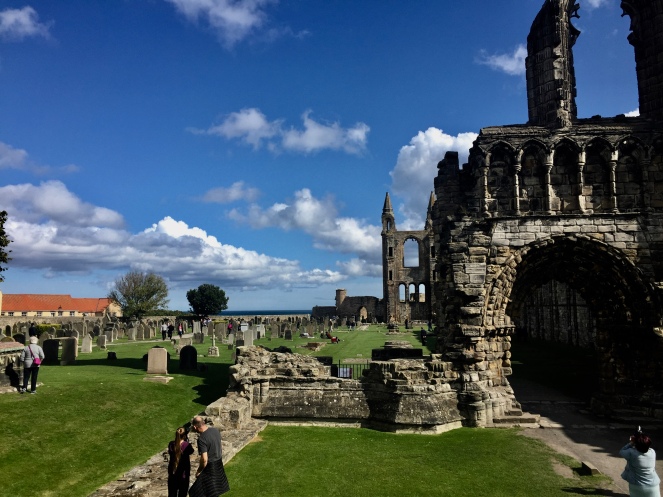 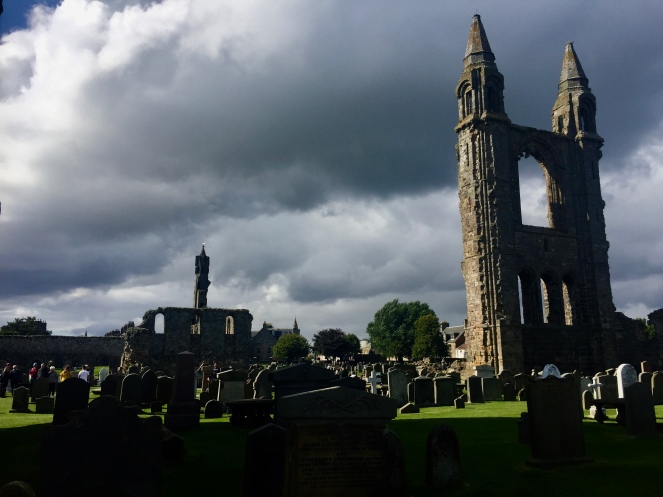 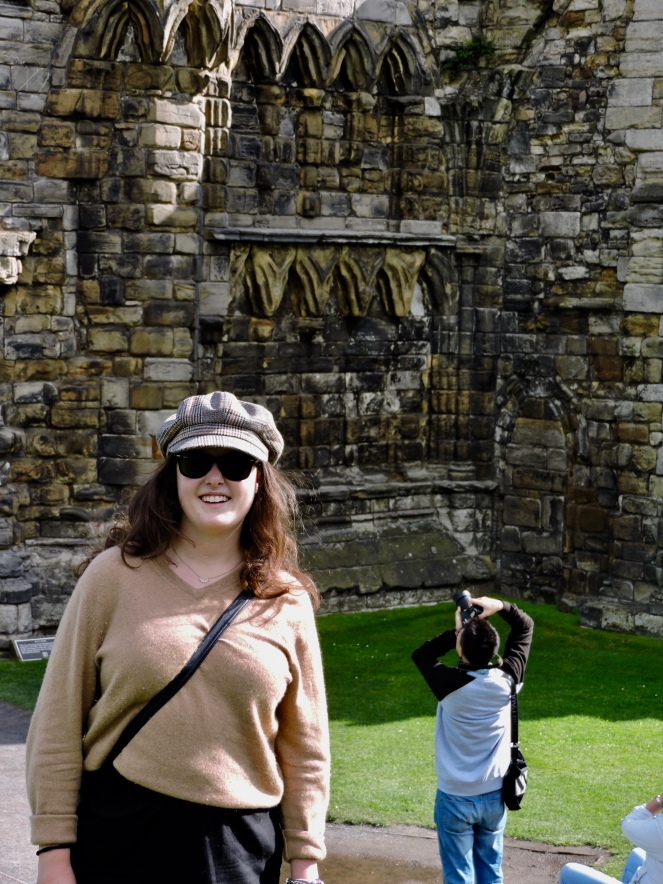 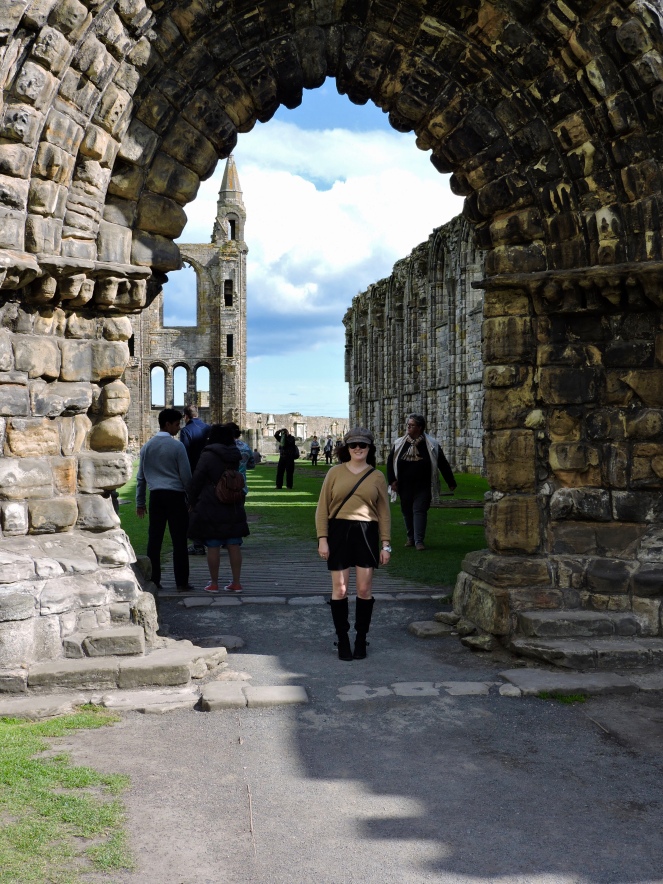 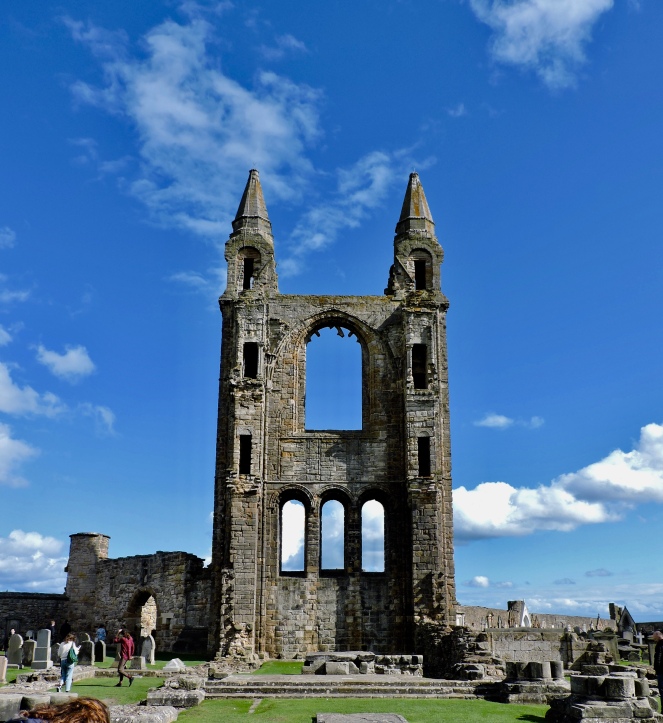 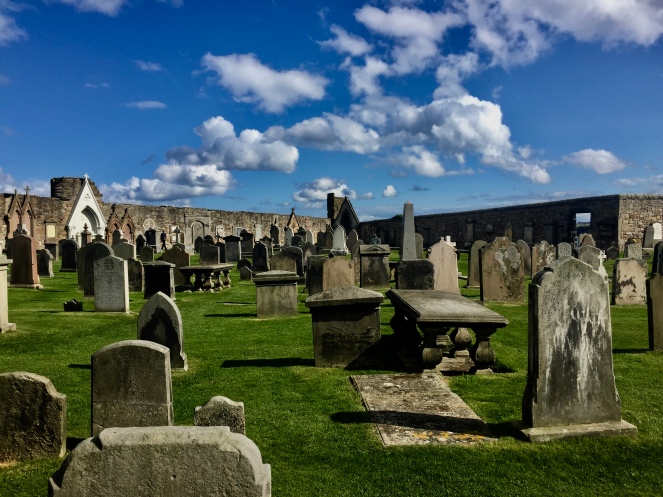 The next stop was the legendary Golf Course, “Old Course at St Andrews.” The Old Course is considered the oldest golf course in the world, as St Andrews was the birthplace of Golf in the early 15th century. Before we walked on the course, we went down to the beach in front of the course. It had been raining on and off all day, so we were lucky enough to see a beautiful rainbow (one of many we would see in the next few days). 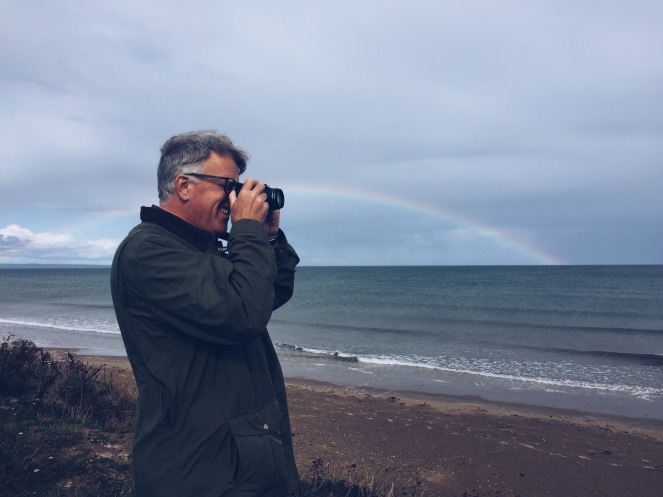 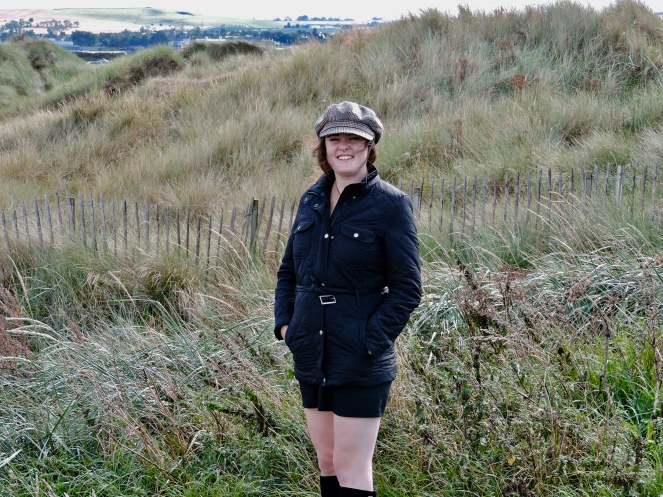 Well, for those of you who actually know me… I have never played golf… nor do I really know anything about it. So the best part for me was just seeing how excited my Uncle Peter and my father were to see this course. A remark I can make was how beautiful the course was. We were lucky that while we were out walking around it didn’t rain! One of the unique features to the golf course is the Swilcan Bridge. The Swilican Bridge is a famous stone bridge, that has become used a customary icon for golf champions to publically show respect to the structure, often getting their photograph taken while standing on the bridge. People were lined up to have their photo taken on the bridge… so I followed suit and did the same thing 😜 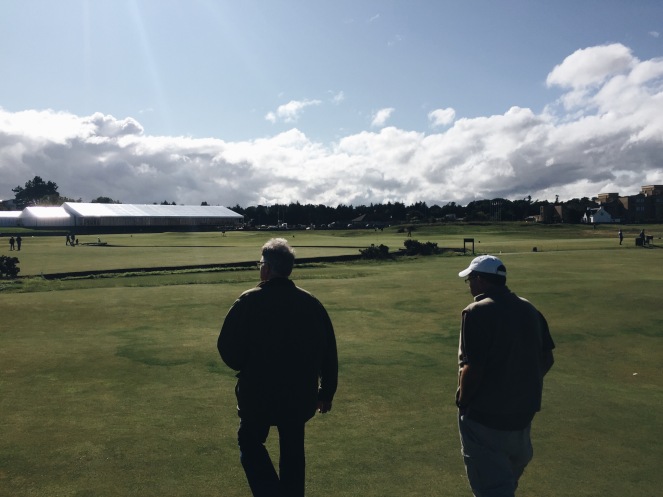 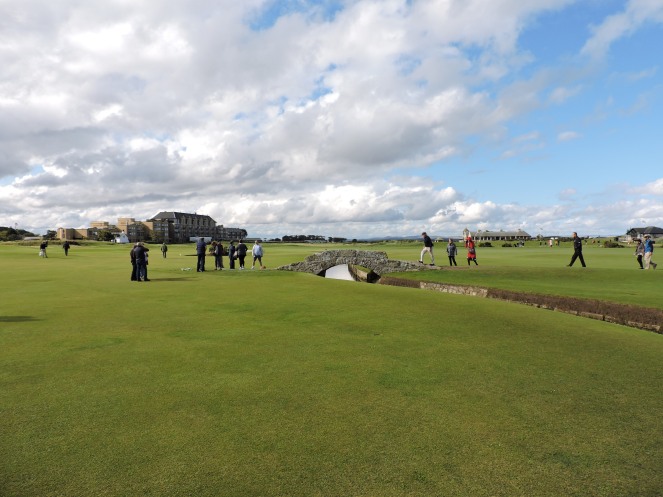 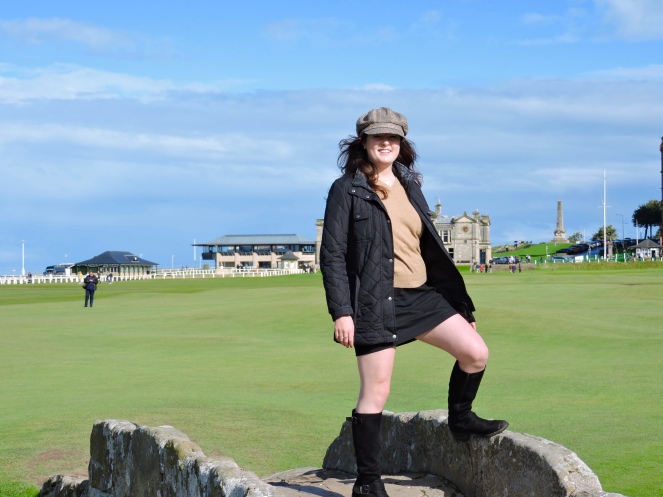 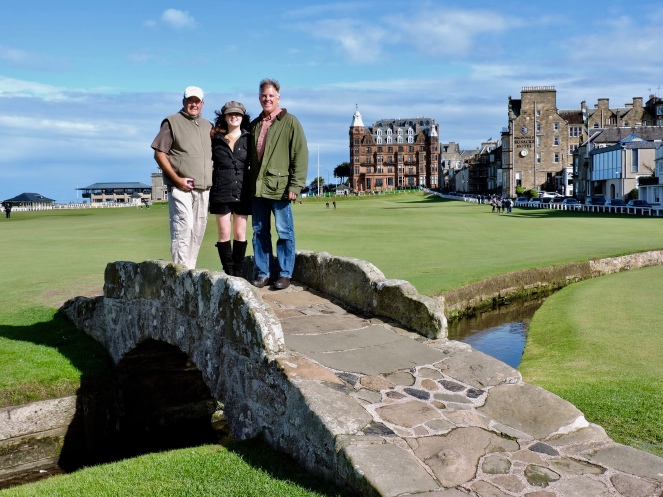 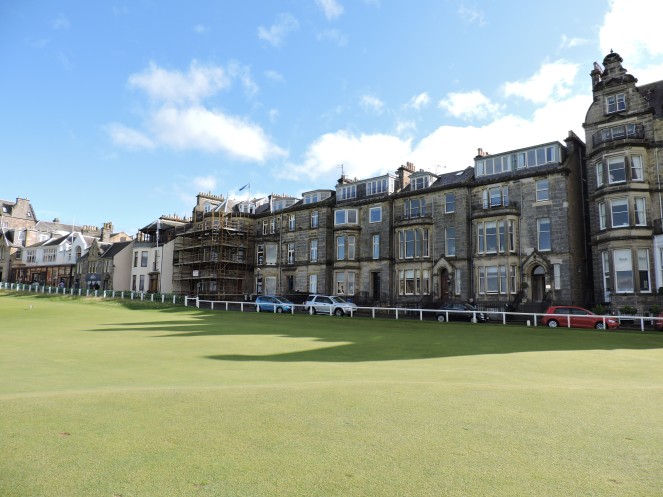 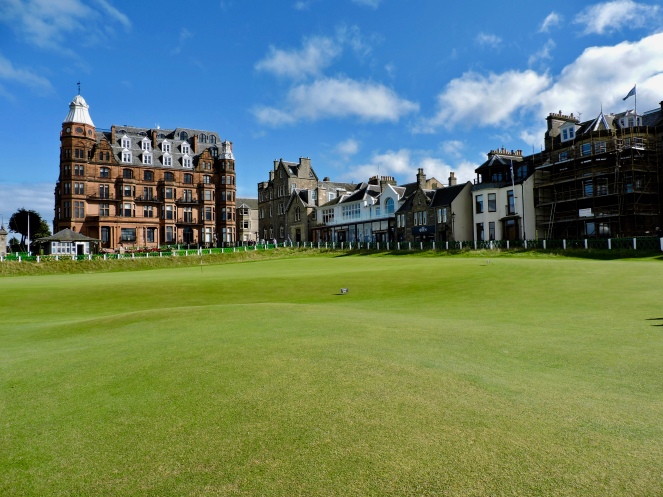 St Andrews was such a beautiful little town, and I was so happy that I finally got to see it. Little towns are always the best destinations to travel to since they each how their own character and something special about them. If you St Andrews is on your list of places to travel and you are in Scotland, I recommend that you check it out, especially if you have a golfer travelling with you.